Nein, it’s a very popular word in Germany. The Germans use it all the time. So much so, that they have all sorts of nuanced way to say it.

A German with extensive experience living and working in the U.S. made this comment about entering into and maintaining agreements.

“I more observed that you make easier commitments in some cultures, and somewhere it takes more time. Then, in some cultures you can adjust when the boundary conditions dramatically change. And in others you stick to your word whatever happens. I guess that probably is the concept of Nibelungentreue, which has both positive and negative implications.” 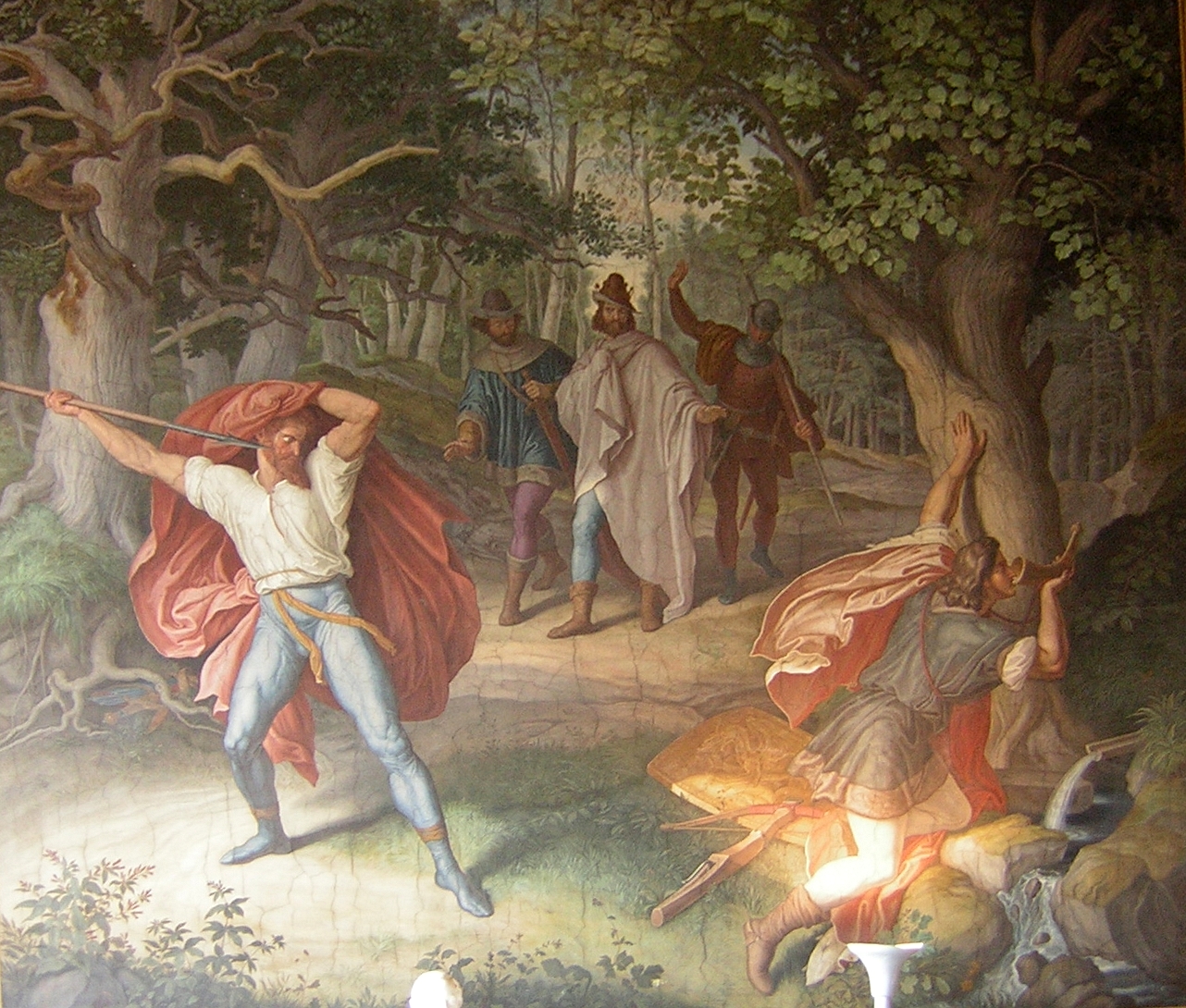 Nibelungentreue is a German compound noun, literally “Nibelung loyalty”, expressing the concept of absolute, unquestioning, excessive and potentially disastrous loyalty to a cause or person.

It is derived from the medieval chivalric ideal of loyalty, Middle High German triuwe, as exemplified in the second part of the Nibelungenlied, where the Burgundian kings Gunther, Gernot and Giselher refuse to hand over to Kriemhild their loyal vassal Hagen of Tronje, who is guilty of murdering Kriemhild’s husband, Siegfried. The brothers place the loyalty to their friend above their obligations to their sister or to justice, leading to disaster and the complete destruction of the Nibelungs.

The modern term Nibelungentreue was coined by chancellor Bernhard von Bülow in his speech before the Reichstag on 29 March 1909. Addressing the Bosnian Crisis, von Bülow invoked the absolute loyalty between the German Empire and Austira-Hungary to their Alliance of 1879against the threat by the Entente Cordiale:

The term is adopted by emperor Wilhelm II of Germany as the German Empire declared war alongside Austria-Hungary on 1 August 1914. After the defeat of the Central Powers in 1918, the notion of th Dolchstoß (“Stab in the back”) also invoked the Nibelungen legend, invoking the cowardly murder of Siegfried.

Nibelungentreue was later, in East Germany during denazification and by the 1980s also in West Germany, applied (derogatively) to Nazi ideology, especially in connection with the Schutzstaffel motto, Meine Ehre heißt Treue. Used in this sense by Marxist commentators, the term describes a fanatical Germanic military loyalty associated with fascism and militarism.

Franz Führmann in 1955 wrote a poem called Der Nibelunge Not (“the plight/distress of the Nibelungs”, the Middle High German title of the Nibelungenlied) in which he portrays the Nibelungs as a Germanic Töterdynastie (“dynasty of killers”) who brought a curse on their descendants. The term is also occasionally found in English-language literature about Nazi Germany; thus, Steinberg (1990) describes Goebbels’ suicide as “a paroxysm of Nibelungentreue“.

Robert Zoellick, former Deputy Secretary of State under President George H. Bush, addresses Putin’s claim that the West broke a promise it made in the 1990s not to expand NATO.

This is about the topic Agreements, and the American logic. Listen carefully beginning at around 2:30, especially at 3:56, where Zoellick reveals crystal clear the American logic: “Nothing’s really final until you put the words on paper.”

This video was posted on YouTube on February 1, 2022. It is not clear when it was recorded. Russia had amassed conventional forces surrounding Ukraine. The invasion began on February 24.

On The Big Bang Theory, an American television show about a group of physicists and the girl next door, two of the main characters share an apartment together. In order to ensure that things run smoothly from the beginning one of the roommates drafts a roommate agreement that outlines all of the rules by which the two characters will abide.

Additionally, anytime there is a change in the characters’ status (for example, if one of them starts dating), this roommate will write a modified version of the agreement to accommodate the new arrangement.

However, the second roommate hates having a fixed list of rules, and rather than being a way to solve disputes, the roommate agreement actually becomes the source of many arguments.

“The uncritical acceptance of eyewitness accounts may stem from a popular misconception of how memory works. Many people believe that human memory works like a video recorder: the mind records events and then, on cue, plays back an exact replica of them.

On the contrary, psychologists have found that memories are reconstructed rather than played back each time we recall them. The act of remembering, says eminent memory researcher and psychologist Elizabeth F. Loftus of the University of California, Irvine, is “more akin to putting puzzle pieces together than retrieving a video recording.”

Even questioning by a lawyer can alter the witness’s testimony because fragments of the memory may unknowingly be combined with information provided by the questioner, leading to inaccurate recall.”

From: “Why Science Tells Us Not to Rely on Eyewitness Accounts”, Hal Arkowitz and Scott Lilienfeld. Scientific American magazine, January 8, 2009.

The first rule is that the conflict resolution process is not the equivalent of a court case. The goal is not to judge either of the conflict parties, but to jointly find a solution to the problem.

Goodwill. It is expected of all parties involved that they act in good faith and are willing to compromise. The mediator should do no more than guide the discussion and help the conflict parties to recognize common ground. The conflict parties are asked to find a solution together. Only when that cannot be achieved, is the moderator expected to make concrete suggestions.

The mediator. Germans expect the moderator to be neutral, to listen patiently to both sides of the conflict, and to support the resolution process in a way which does not damage either party. Neither blame nor guilt should be attributed to either of the conflict parties. Instead, the mediator focuses on reconstructing events and describing the problem.

Heiner Geissler, a former high-ranking member of the Christian Democratic Party, is the most prominent of German mediator. Geißler has been brought in numerous times since 1997 to help resolve conflicts between companies and unions. He was in the national spotlight over the last few years in his attempt to help resolve a major political conflict in the state of Baden-Württemberg concerning a the reconstruction of the Stuttgart main train station.

On July 26, 1775, the Second American Continental Congress appointed Benjamin Franklin as Postmaster General to organize and run the Post Office Department – the predecessor of the United States Postal Service (USPS).

The USPS has a reputation for always completing deliveries on time. Its unofficial motto comes from an inscription on the James Farley Post Office in New York City, which reads: “Neither snow nor rain nor heat nor gloom of night stays these couriers from the swift completion of their appointed rounds.”

In fact, postmaster was considered to be such an honorable title that two postmasters went on to become President of the United States: Abraham Lincoln and Harry Truman.

The amount of time taken to fulfill a request.

In computing, turnaround time is the total time taken between the submission of a task for execution and the return of the complete output to the customer/user.

If bringing in an item for repair, be sure to find out the turnaround time so you will know how long it will be before the item is ready for you to pick up after being repaired.

The total time consumed in the round trip of a ship, aircraft, vehicle, etc.

Aviation. the elapsed time between an aircraft’s arrival at an airfield terminal and its departure.

The process of completing or the time needed to complete a task, especially one involving receiving something, processing it, and sending it out again:

The earliest practical form of programming is generally considered to have been done by Joseph Jaquard in France in 1804. Jaquard designed a loom that would perform certain tasks when the appropriate punched cards were fed through a reading device.

Since 1804, programming has become much more commonplace, and new computer programs are produced every day. In order to keep up with the competition, most software companies will begin selling programs long before they’re perfect, only to release updates and newer versions as the programmers correct flaws and add new features.